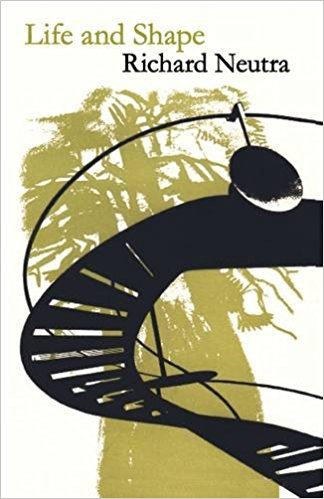 by Richard Neutra In All, Architectural history & theory, Books, and Memoir

Life and Shape: The Autobiography of Richard Neutra

In print again for the first time since 1962, the autobiography of this legendary architect provides insights into the life of one of modernism’s most influential architects. With a new foreword by Dion Neutra.

Since he followed it all of his life, Richard Neutra (1892–1970) must have relished the maxim of the Greek philosopher Socrates: ‘The unexamined life is not worth living.’ In his books, articles, lectures, correspondence, and even casual conversations, Neutra constantly examined, not only his own life, but the lives of others – present and past – and the human and natural world they inhabited. Nowhere was this truer than in his autobiography Life and Shape first published in 1962, which now, after years of being out of print, has again happily come back to life.

As opposed to Survival Through Design (1954), his superb collection of densely philosophical essays, Neutra took a different tack in Life and Shape, following a lighter and more deliberately relaxed approach. It was as if the usually serious and intense Neutra was giving himself permission to reveal his richly ironic sense of humor and to probe areas in his personal experience which he had not examined as closely before. These included hitherto unrecorded memories of his parents, siblings, and his childhood and education in imperial Vienna, his numbing experiences as an Austrian artillery officer in World War I, and the beginnings of his architectural consciousness in his response to the work of Otto Wagner, Adolf Loos, Erich Mendelsohn, Louis Sullivan, and Frank Lloyd Wright.

As in the autobiographies of Sullivan and Wright, Life and Shape concentrates on Neutra’s earlier years, both in Europe and America. While he naturally recounts his memories of such well-known commissions as the Lovell Health House (1929), his own Van der Leeuw Research House (1933) and the von Sternberg House (1935), he also muses on such less famous buildings as the small, and now virtually forgotten, Mosk House (1933). Life and Shape also confirms Neutra’s obsession with the passage of time and his firm resolution never to waste it.

Like Sullivan and Wright, Neutra eschewed writing a factual chronicle, and – at the age of 70 – composed instead a meditation on the aspects of his life and work that seemed, in retrospect, to be the most interesting and significant. He felt no need to try to “include everything” but rather to present an honest recounting of his memory of his life. In writing my own Richard Neutra and the Search for Modern Architecture [Oxford University Press, 1982; Rizzoli Press, 2006], I relied on Life and Shape when I wanted an account of Neutra’s experiences told in his own authentic voice. For future generations of architects, historians, and readers, it is good to have it back.

–Thomas S. Hines
UCLA Professor Emeritus of History and Architecture, author
of “Richard Neutra and the Search for Modern Architecture”