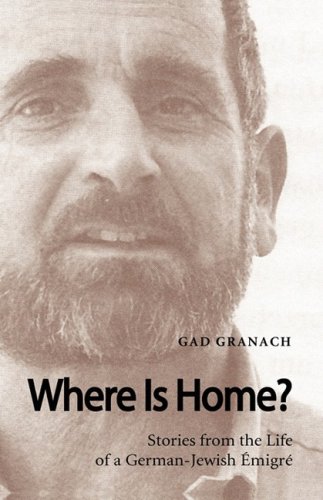 View Gallery
by Gad Granach In All, Books, and Memoir Tagged In german-jewish and memoir.

Where Is Home? Stories from the Life of a German-Jewish Émigré

Where Is Home?
Stories from the Life of a German-Jewish Émigré

“Did you come here out of personal conviction or are you from Germany?” was a question asked of German Jews when they arrived in Palestine in 1933. Few came out of conviction. The majority of the sixty thousand German Jews who arrived in the then-British mandate came because they had no other option. Palestine was not the land of their dreams, but rather a place of asylum where one would have to start life anew. Doctors became bus drivers, lawyers raised chickens, and artists worked as waiters. For the young, however, immigration to Palestine was a great adventure, the beginning of a new life free from old conventions and, sometimes, the beginning as well of a life or death battle.

Gad Granach still went by Gerhard when he arrived at Haifa Harbor at the age of twenty-one. The son of a famous actor in Berlin and of a politically engaged mother, he was not one of those who came out of conviction. He made the best of it, whether working as a reserve policeman for the British, a construction worker in Tel Aviv, or a locomotive driver along the Dead Sea. He encountered a land of neither milk nor honey, and took part in five major wars and a number of smaller ones, wishing all the while that God would ‘choose’ another people and leave the Jews in peace.

“A charismatic witness to the Berlin of the 1930s, Israel during its kibbutz years, and present-day Jerusalem.”

“A contemporary from whom one always desires another sentence.”

“A Charlie Chaplin of the pen. This is how a book about Israel should be.”

“Filled with a wonderful and lively sense of humor”

“Granach is highly entertaining and thought provoking – a supreme raconteur!”

Available through these Amazon links: US, UK, France, Canada